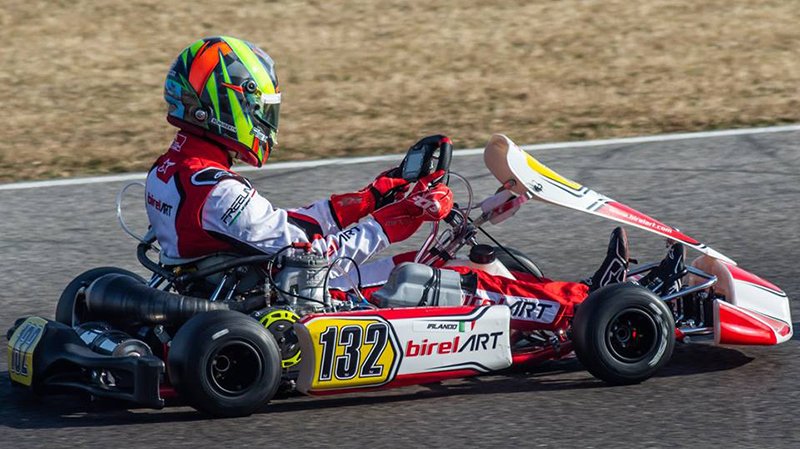 On occasion of the second round of the WSK Super Master Series held in Lonato, Alex Irlando fights for the final win, but in the end he has to settle for 8th.

Second weekend in a row at the South Garda Karting for Alex Irlando: after the unlucky Winter Cup of last week, the driver from Valle d’Itria keeps improving with his new BirelART – TM.

Facing all the main opponents in the gearbox class, on Friday Alex posts a 46”727 that gives him the 7th spot in qualifying. Throughout the heats, the new BirelART’s driver improves his performance: 5th in the first heat on Friday, 2nd and 4h on Saturday. His comeback in the heats gives him the 6th position overall, but on Sunday Alex wakes up with the right foot and during the prefinal he fights for the final win against Paolo De Conto. After finishing the penultimate race behind the two-times KZ world champion, Irlando starts the final race from the 4th spot.

When the lights turn off, the BirelART #110 starts great and takes the third position despite the fierce battle in the first positions. The battle against De Conto and Alex’s former teammate Bas Lammers flares up, but after a few laps Alex slowly starts losing ground and finishes the race on P8, fighting in the leading group.

“It’s a shame not being able to fight for the win until the end. We started pushing from the first turn: each of us tried to pull away from the pack and lap after lap I started slowing down a little bit. Even if you simulate ling runs during the tests, it’s never like a real race. I still have to understand how the kart reacts in these situations. Anyway I saw a lot of progress and some big steps forward! I’d like to thank all the team for what they did and we’ll keep on improving race after race!”

The next round will be in La Conca, Lecce (Italy) from March 8th to 10th for the third event of the series.

For more information on anything related to Alex Irlando, please visit www.petrolheaditalia.com or www.alexirlando.com and be sure to follow our social accounts: Petrolhead Italia ( FB – IG –TW ), Alex Irlando ( FB – IG ).